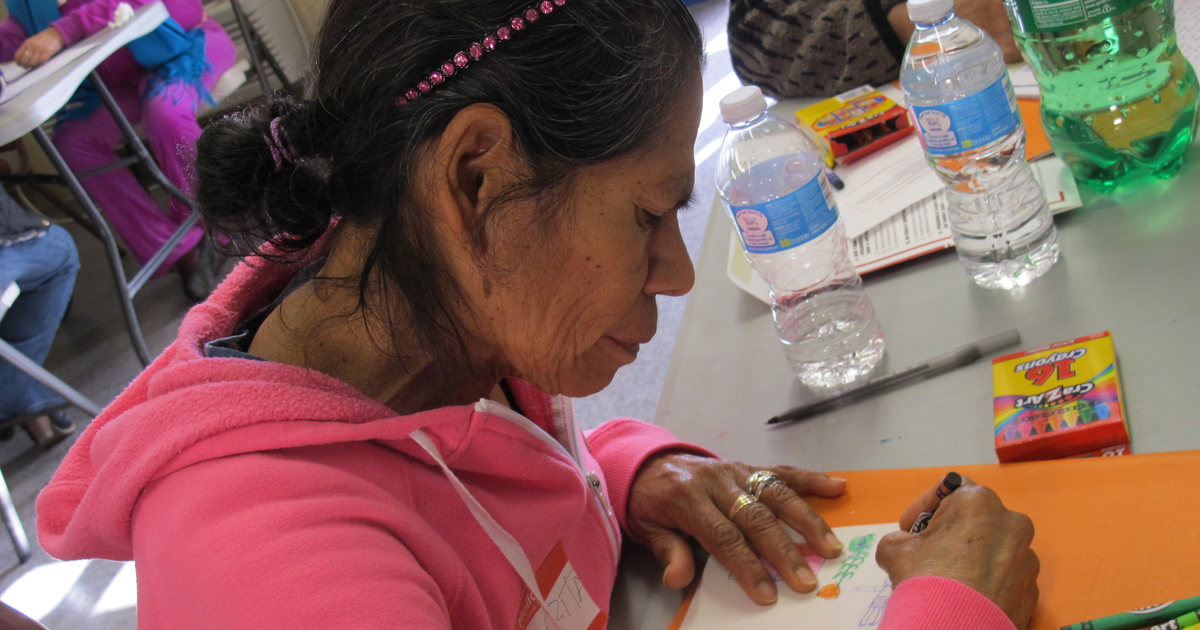 My name is Margarita Contreras. I come from Oaxaca and I came here to work. Why? Because I was left alone with four children. My husband came here, and here he stayed, he didn’t return. He never returned. Later on, I came here to the United States in order to work, but I was only here four years because I left two children back in my town. And their grandparents were already very old, and their grandmother told me, “vente mija, come, because your child is dying. His head, his face has become swollen.”

I came here to the United States to work. I came for four years. But I became pregnant here by my husband with the baby I have now, the boy. His grandmother told me to return because the child’s face was becoming swollen. I had two children over there.

“Come” she said “because your son is dying.”

Then my belly was already big. Back then, there was a lot of migration, we used to work and hide. And the supervisor did not pay us. He paid us three days, and he didn’t give us the rest, but we couldn’t complain. We couldn’t complain because we were very scared. So then, when my mother-in-law told me my child was dying, I decided to go, pregnant and all.

Eight days later, my child was born, who is now here, he has three children. He was going to be born here, but because I went there he was born eight days later. Then, when he was born, we left by car. Well, my husband left, he didn’t return. Then, I was left with the three children, he left me with them, one was two weeks or one week old, I think. And he left, he didn’t return no more. Now, he’s with another woman.

My life was very hard, because I was really just selling my nanchitos… chicken… there I was, waiting and praying…My children growing, and to tell you the truth, I had had enough. My husband used to beat me. He hit me all the time… and honestly, well, I couldn’t leave him, because I already had my children, the two I had. And then with the third child, he left me and came to the US, and I stayed; my two sons grew up, and came north. So then… my children were grown up, and they did… honestly… I put up with fifteen years by myself. Fifteen years. All alone over there in Mexico…like…I lasted fifteen years alone in Mexico…

And thank God that I got a job, working alongside women. I was no fool. I started working for my child, and now, my girl is nineteen. She finished high school this year. How can we be angry with all God’s blessings? She now has her baby, and we are having a good time, because, why not? Our dear God always give us a hand.

But for me, my story is very painful, and I like this meeting because I like listening to labor rights, for my children, so they know how much mistreatment there was because there was. So that is just my story.

“Our parents were very poor. For us, we only ate what they gave us to eat, beans. It was very good back then; I will not tell you that it wasn’t good with my padrecitos. Right? Even eating just beans, my parents were good to us.”

They died, and I was left alone, but…my dad died when the car crashed…okay? Yes, God doesn’t hold our hands, but he feeds us how he can, so we eat. That’s my story, okay?

That is all. What I say to my children is that they be good parents to their children. We suffered a lot because we didn’t have much food; there wasn’t plenty, so we never wasted any. So as parents which they already are, they have to care for their children and wives, and work the best they can. Work, and not do drugs because that is not good. Thank God, my chamacos do work.

My dream was to come north to work so as to have something else, even a little bit of money with which to eat. My dream; to be happy with my children and my grandchildren. We have achieved it.

I sometimes tell my daughter, “You have your baby now, start working with that in mind, so don’t be here and there, be able to support your child as it should be, so he becomes a good man.”

Storyteller Margarita Contreras works in the fields and is from Oaxaca, Mexico.