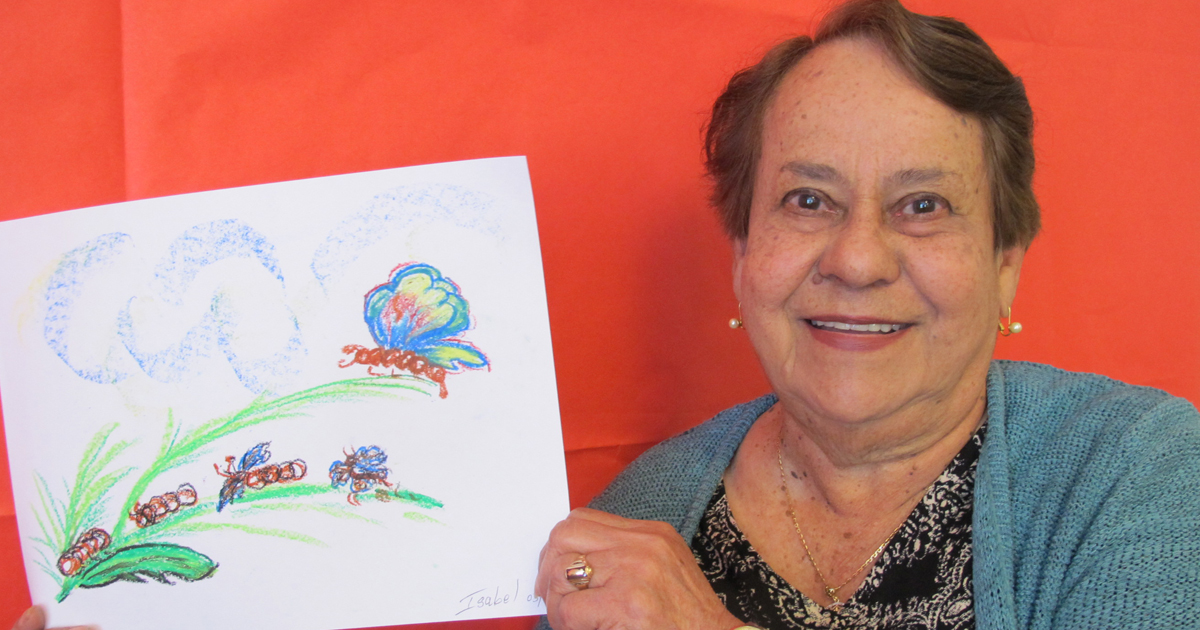 My name is María Isabel Barton. I am Salvadoran by nationality. Now I have dual nationality because I accepted American nationality. My mother was a great lady; patient, calm. In life, it was my lot to be an only daughter. She and her family dedicated themselves in their entirety to making me a good woman.

I studied in a school run by nuns. I graduated as a teacher. For twenty-five years I worked with children who were seven to twelve years old and then due to life’s negative circumstances my country became congested. A war began—fratricide. I was married. I had four children and my husband and I decided to come to the United States thinking to make a better future especially one full of peace for my family. We arrived in 1983 with four children and six suitcases.

We came legally with papers and everything but despite this, life was completely different. We had left friends, jobs, homes. I left my elderly mother. All this created enormous nostalgia for our community. Nevertheless trusting in God, and each of us working hard, we sought to rise above…and I already had two older daughters. One of whom had been studying at the University of El Salvador, but had had to leave it. She came and became a caretaker for the elderly while starting college to learn English.

Then our second daughter enrolled in the Army. She was in the army for two years. Then she moved on to the Air Force. She was there another two years. When she came out she continued on to the University and was able to obtain her masters and her degree. Same as our eldest daughter, she was able to achieve by working hard, working very hard. Now she has the satisfaction of being one of the people working at the University in Berkeley. In a role that represents the capability of the people of El Salvador and with much pride.  And my boys also decided to study and work hard and now also have their positions. They are honorable citizens and demonstrating that we did not come to this community to take and destroy rather to act and create a worthy society.

“And so I also managed to learn a bit of English. Not perfectly. I was able to get a teaching credential and work for fourteen years with the National Hispanic University. At this stage of my life I retired. I now live with my children. Well some time with one, another time with another, but I am satisfied and now I think that this little caterpillar has come to its end. It flew from flower to flower until now she is able to rest.”

That’s my big feature story because the moral is that when you want to find a way, you can. Nothing is impossible. You can always enjoy things but not fully for our country leaves an imprint that we never forget because it is a piece of nature in each of us. We will love the place where we were born forever.

I’ve returned some four times because I’ve no family there. My husband came with me and died here. Many times I think I’ll return, but perhaps it’s impossible because none of my children want to return. I still have my little house in my city called Santa Tecla. A pretty city, it filled with lots of people when the war happened because the places that were attacked sought refuge because there wasn’t much of a revolution there.

We came to San Pablo (Ca.), because my husband had family there. They helped a lot. They had a little apartment for us. We had practically nothing. We had brought a little money from the properties we had sold, but it was gone quickly and my husband began to work.  Then my two girls began to work. One taking care of elders and the other went into the Army. Little by little we were left with the two youngest. When the eldest of my boys turned eighteen he went into the Army and was sent to Germany. He was gone eight years. When he returned he was a man. Many of us know how hard that is. Had it not been because of the war we wouldn’t have come. We were….we could have been fine in our country. But life is a great thing to be defended at whatever cost, especially when it comes to our children. We make the sacrifice however large it is, not mattering. And that way time passed.

Today the memories, sometimes gracious, agreeable, are enjoyed. But sometimes I feel, I get upset and say, “Why did we have to go through so much?” But God always helped. That has helped us. We believed in God and we asked with our whole heart that he reach out a hand and take us. And yes, he helped. Today I feel happy, full because my children are well each of them, thanks to God. All are spread out and married to different races. There is one who is married to a Filipino, the other is married to a Filipino-American, a son married to a white American, and the other son is married to an African-American. Imagine that!

It’s a good thing because all of them are….they haven’t any major problems at home, at work or in their daily lives. Thanks to God no great worries. We don’t have any major problems. That’s the way we are. Let’s see how far I get because I’m now seventy-eight. I’m almost eighty. With all this suffering, I consider it a blessing from God to have arrived at this age. I’m in good health. That helps. I still help out in their homes—depending on who I’m with. I cook. I clean, whatever is most pressing I help. That’s my story:  the little butterfly.

Storyteller María Isabel Barton attended the Sharing Stories of the Latina Experience workshop at the Cesar Chavez Branch of the Oakland Public Library.