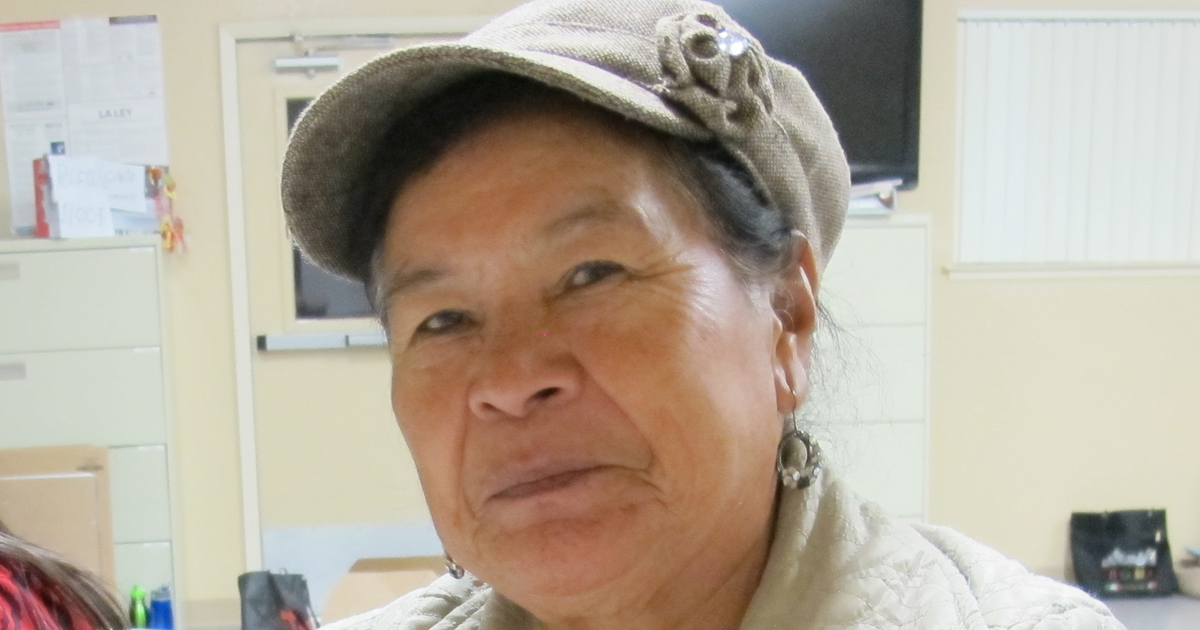 When my last child was just about a year old, a lady that came from the United States, who had been a neighbor of ours, said to me: “Martha, let’s go to the States.”

I told her, “Miss, I don’t have any money to go there. It takes a lot of money to leave the country.”

“Listen,” she said, “with a little money you can leave.” It was a little money back then. So my brother-in-law, my husband’s brother told me, “Martha, if you want to go to the United States, I’ll lend you the money.” He wanted me to leave his brother because he knew he gave me a hard time. And that’s how it happened. I made the connections, organized the trip to get here.

I came by way of an excursion that went to Isla de Mujeres. I left and arrived here at one of my husband’s cousins, my kids’ father. She let me stay with her here in the United States. She found me work. I worked. Then I was paid forty, thirty dollars a week ­– little money. I worked watching two kids. I would send my kids money that I earned. The country of El Salvador is very poor. It was very difficult to leave my kids. I left a one year old.

After a year I was able to begin to save money to be able to bring them all. The lady I worked for told me, “Don’t worry at all. I’ll help you bring your kids.”

After almost four years of working with this woman, she gave me the money to travel to my country to bring my kids. I brought all six of them. I didn’t have any documentation yet, and I still brought them. When I arrived with my kids, my employer always helped me. She increased my salary to help with the cost of the kids, all little ones.

“The one year old I had left was now a little older. He didn’t recognize me. He also didn’t think I was his mother. He didn’t let me touch him. “No,” he would say. “You aren’t my mother!” His brothers would say, “Yes, this is mother. She is our mother.”

With time they convinced him. They would say she’s our mother and he began to be convinced, but it would make me feel ashamed…”

I placed them in school. The lady I worked for helped me a lot economically. She would give me groceries. She helped me take care of my kids. They grew. They studied. They learned English. They grew up. Now they are grown and married. Each has their own family. The most critical time is behind them. I feel happy that they are with me. They’re also all citizens. I’m also a citizen.

First off, I thank God and all the good people who were kind to me, my employer, and my husband’s cousin were good to me. I am very grateful to them. They always helped me. They protected my children. My kids are also happy because they say, “Uy, my mom!”

They’re always thinking of me, they are proud they have a mother. “Ay, my mother! We admire her a lot even though she suffered to raise us and bring us here!”

Now they tell me, “Ay, mother, feel happy. Go out with your girlfriends, continue with your organization! They tell me.

It was in ’92. I joined Líderes Campesinas because I wanted to find an organization that recognized the time I had lost when I suffered. One where I could learn to help other women who were going through the same situations I went through. Thank God! It’s as if God gave me this organization and this time. We’ve learned a lot. I continue to learn, because one never stops learning new things, to give guidance to the community and more so to the women who are in these situations. I’ve known of many cases where women have been mistreated and even been killed by their man. We’ve even at times also had to defend men. Finally, I thank God for having found this organization.

Storyteller Martha told us that she is a grandmother and has twenty grandchildren. She is from Central America; from El Salvador and studied dress-making. This story was told to us during the Lideres Campesinas:  Sembrando el Futuro workshop in Greenfield, California.