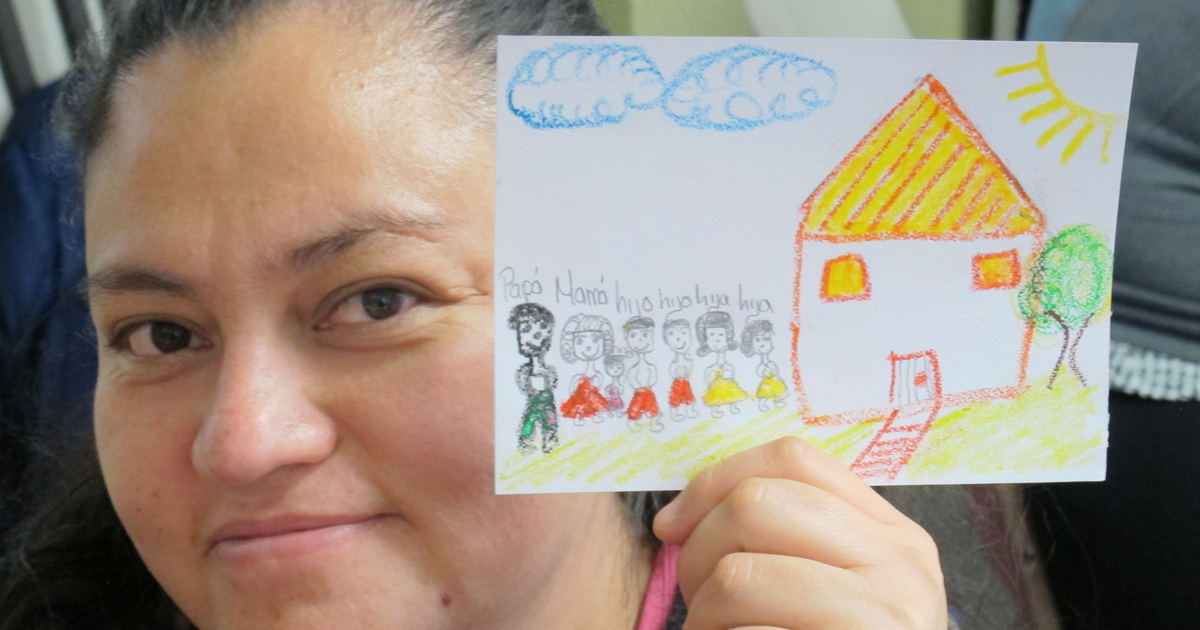 My name is María Rubio, I was born in Mexico City, and my parents are from Morelia, from a ranch called La Agua Caliente. They went to live to Mexico City. I was born there. I met my husband in Morelia, Michoacán. He was a soldier; I met him as a civilian. And from there, Morelia, we came to the United States.

We came through the hills, crossed the hills, just as any other immigrant who crosses the hills; watching out for the immigration helicopters. I did not know beforehand that I was pregnant. I realized that I was pregnant when I came to America because I was told I was three months pregnant. I crossed while pregnant, really, without water, without eating, because I was always behind, and I told them, go, leave me behind. Why? I did not mind if I stayed there, if they caught me, I couldn’t stand to walk anymore. They dragged me, and then finally I was able to reach this country, my husband and me.

We arrived in Fresno. The coyote who brought us from Los Angeles to Fresno, left us at his home, but when the owner found out we lived there, the owner of the house told me that if I wanted to go with him. He said, “You can come with me and you’ll make lots of money, and we are going to… – I don’t remember the name of the county where he was taking me, but he told me it was a house with lots of women where you can make lots of money, he said; but you have to come alone, not with your husband.” And I said no, I told him I didn’t want to. And I was pregnant, right? So I told him I didn’t want to, and from there, the person, the lady at the coyote’s house where we were living, was not nice, so she ended up kicking us out. Because we couldn’t pay as we had just arrived.

“I realized that I was pregnant when I came to America because I was told I was three months pregnant. I crossed while pregnant, really, without water, without eating, because I was always behind, and I told them, go, leave me behind. Why? I did not mind if I stayed there, if they caught me, I couldn’t stand to walk anymore. They dragged me, and then finally I was able to reach this country, my husband and me.”

Later on, in social services I met a lady, we told each other our lives, and she gave me a hand so I could live in her house. Without knowing me, she told me she wanted to offer her house to me and brought us to Firebaugh, to live in Firebaugh, because we used to live in Fresno. So we moved to Firebaugh. But long before this, before I met that lady, during our time in Fresno, my husband met a boy who couldn’t sleep inside his house so he slept in the car. I slept inside, on the floor, but it did not matter, because I had a roof over my head, and the boy slept in the car.

Later on, well we didn’t have a place to live. One week we stayed in a hotel, a person also paid for our room. I spent like about three months eating Maruchan soup, with just tap water and cookies. Three months, while pregnant. And then it was around the time I met this lady. She took us to Firebaugh. I lived in her house. When I arrived, she bought me clothes, shoes; she gave us to eat and to wear.

Then, when we left that place we went to live in another, to a rather ugly little room where there was only a tin roof with holes. When it rained, the water went through. My baby had already been born, and there were huge rats and mice. We had an old refrigerator.

After we were with the lady, then we moved from her house, because her aunt offered us a room, but in very poor condition. She made us pay a hundred dollars, I think, one hundred and fifty for rent. Like, she was helping us out, because they gave us a refrigerator, but it was all rusty, also an old mattress and dishes, very old and in very poor conditions. But we didn’t have anything. It was a very ugly room, with no ventilation. To wash our clothes, my husband made a kind of laundry sink, with old wood. And there I washed my son’s clothes and mine. Well, we didn’t have a heater, and no air conditioning. He tried, despite the horrible conditions, well, he tried to avoid the leaking roof water, because I didn’t know anything. Until they told me there was a program called the Housing Authority. Then, once they told me, I went there to apply to the Housing Authority.

After that, we left that place and went to live at another house with some other people. But as the saying goes, “guests, like fish, stink after 3 days.” And because it is true, that lady had problems with her husband, and she would take it out on us. Later, we were able to get an apartment by ourselves. We paid three hundred dollars. It was like the first, in very poor condition, but maybe just a little bit better.

We lived in better conditions; my husband was working in the fields, and I was also working in the fields. We suffered a lot, because as I said before, there were many anomalies in the field. Why? Because sometimes you don’t know your rights, or how to defend yourself with intelligence. We always react like with human instinct, you get attacked and you feel like doing the same, right? Because they’re trying to be hurtful. What you want is to just work. You go to work. You don’t go with the intention of hurting a compañera or compañero. I’m doing the same as my other coworker. And I don’t have a reason to be fighting. What I want is to work, because I need to. If I work it is out of necessity, not because I don’t need to work, that’s why we’re working.

I was working because I had a child, I was able to work, and then because I had five children, well, I was no longer able to work, and it was harder for me. Because one has to pay the baby sitter, and sometimes there is government childcare, like at the place I at live in Madera. Right now I live in Madera, but you have to be on a waiting list, until they call you to take your child. And then you have to take them and pick them up, and if you don’t pick them up when they tell you to, then like they say they’ll take them to CPS (Child Protective Services). And then, you also have to find someone who is willing to help with that, right? And it’s a mess. So I spend more of my time with my children. I am a housewife, and my husband works in the fields. Just recently I got into the Lideres Campesinas organization.

Here with Lideres Campesinas I’m learning a lot. Above all about the many rights we have; about many agencies; many workshops. As well as to share what you know with others. If someone needs help, and if one can be of assistance, even referring the person, you do it and that is what we are here for, I think; to help one another. Because when someone says they don’t need any help, well I don’t feel he is being honest. And we do not mind about each other, because, unfortunately, the Hispanic and Latino are almost always biting at each other. And it’s not about attacking ourselves; it’s about helping each other.

Storyteller María Rubio is a housewife and belongs to the Lideres Campesinas organization. She is from Mexico.