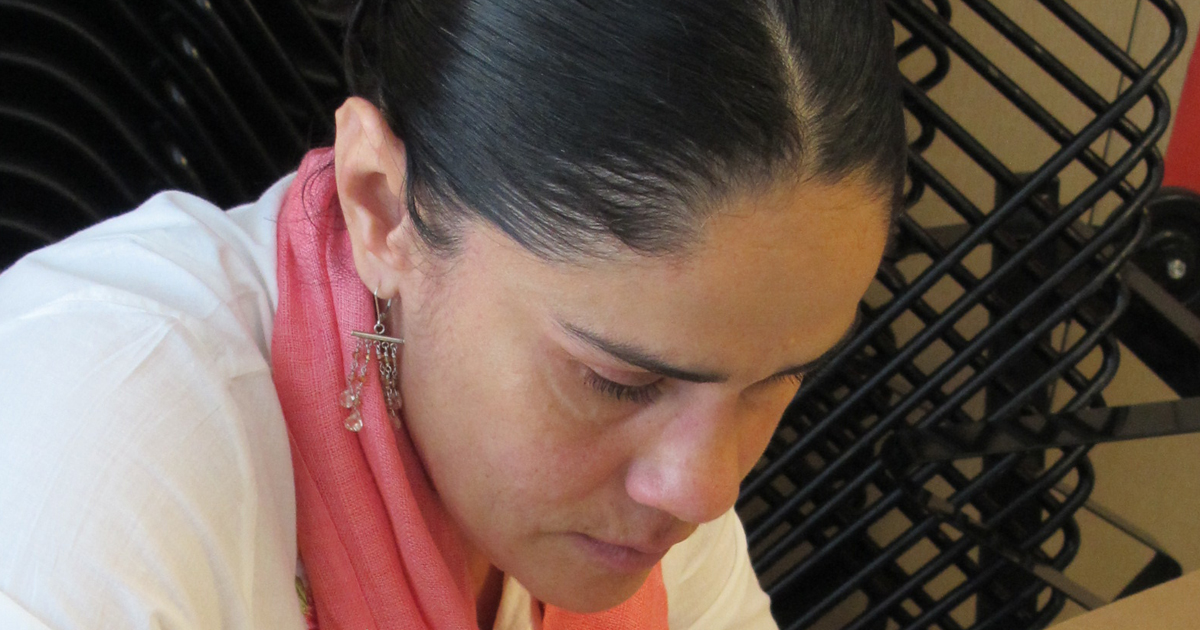 I have three sons:  nineteen, fourteen and the youngest one is thirteen. He just turned thirteen but he is autistic. My son doesn’t speak. He doesn’t communicate. I’ve really felt badly because there is a lot of rejection from society, in the schools, from the family. It is hard to live this, to understand, because I’ve lived this for thirteen years. Since my son was diagnosed these twelve years have been the most difficult. It is really hard not knowing why, why does this all happen? Why there are more and more kids (with autism)?

Where I live, on my street, there are many special needs kids:  Down syndrome, autism, delay problems. It is hard for us. My older children have accepted, understood, and loved him, but asked me once, “why us?”

There are families that have other problems, but it is hard for us because we are living it. It is not the same to see it from the outside as it is to live it in your house. It is easy to say, “Oh, te comprendo (I understand)”.  It is a mission. Me trying to understand, wanting to understand him, the world. Now my son is going into adolescence and I don’t know what is going to happen to him.

He has help. He’s in the Regional Center. He’s in special education classes. Two days ago he came home beaten up. One day he was bitten twice. He came home with his arms seriously hurt. My son doesn’t speak. I don’t know what will happen. His previous school was a school in this District. They had him and they discriminated against him. The teacher put him on “time-out” for more than six hours. My son was in “time-out” for more than six hours!

But I fail when these things happen in school, when my son was discriminated by the District last year. The schoolteacher put him on “time-out” for six hours. Six hours! When I found him, I found my son barefoot, dirty, locked in a separate room. They hadn’t given him lunch. I stepped out and told them, “Whomever I need to deal with, I will. If I need to go to Sacramento, I will. It is a right. You are abusing my son.”

Then that was the situation that put my son in this school. It was solved the “next day”. Why? Because they knew the problem that they were in and that I had taken photos of my son. How many other people are there like me? I told them the day of the meeting, “I don’t know who I have to deal with or where I need to go, but my son will be respected, because my son was born here. My son has rights. It is a right that my son has and you are violating that. If I were to have done that to my son they would have taken him from me. Who is at fault here? Where are the authorities?

At home, our son, we love him, we help him. My older children love him so much. I have good sons, thank God. The eldest one is in college. He loves music. Both of them are in a jazz band. They play the saxophone, the guitar. They are really involved in art. They are good kids. They play soccer. It is something where I have to be involved with them on a daily basis. The role of a mother is not easy. You’ve got a home, you have a husband, the house, the children, the food to prepare, a job outside the home, and sometimes I feel I am overwhelmed.

I think about my sons and I say, “I have to keep going for them.” This is the engine that drives me. This is my way to keep moving; to get ahead; my children, my family. This is the engine of my life because we have to take care of my son. My biggest fear is, what is going to happen when my husband and I are no longer here anymore? That is my fear. That is why I have to try to have my older children be united. I always tell them,

I’d rather not have (legal) papers and to see my son well. In my country, there isn’t all the help; schools like we have here. There, if there is a special needs child, schools do not want them. They say, “Do not send him to school.” Thank God we are here.

The first year we went (back) to (visit) Mexico, we had a very serious accident. The truck my three sons, my husband and I were in, overturned six times. My oldest son was thrown from the truck. The only one who didn’t have anything happen to him was Andres, my autistic son. Nothing. Then I think, what would have happened if all of us had died and he had been left?

Storyteller Rosa shared her story at the Sharing Stories of the Latina Experience that was held at the César Chávez Public Library in Oakland, Ca. She tells us, “I am a strong woman, a fighter, who dedicates herself to her family 100% and (is) 100% Mexican.”